I received this email today from Timeline Ministries and thought I would share it with you...


Topping up your oil &trimming your wick!

David was greatly distressed because the men were talking of stoning him; each one was bitter in spirit because of his sons and daughters. But David found strength in the LORD his God. 1 Samuel 30:6

As David returned to his home in Ziklag he discovered his enemies, the Amalekites, had destroyed or stolen everything which was important to him. David stands alone, stripped and confused, in total despair, on the verge of being stoned by his men.

God fully intended a crisis be allowed in David's life that would take him into the more. For sixteen months, David had lived with the Philistines, leaning heavily on King Achish. God wanted to give David the kingdom; he was about to settle for Ziklag. God would not permit David to settle down in a place that depended on the flesh for survival. Could it be that David had grown tired of the struggle, weary of so many battles, so many hardships? Was he thinking he had earned the right to an easier lifestyle?

As David sat among the ruins of Ziklag he had a choice: he could allow grief, depression and bitterness to conquer him; Or he could fight back. David had no one to encourage or strengthen him, so he "strengthened himself in the Lord his God". But how did he do this? Consider the Psalms written by David during troublesome times.

In Psalm 34:1-4 David declared, "His praise shall continually be in my mouth." Praising God is part of the path to encouragement. When praise is in your mouth, there can be no grumbling, no complaining and no negative speaking or thoughts. Praise is the language of faith. If you want to strengthen your faith, begin to praise God. David also declared: "Oh, magnify the Lord with me." "Magnify" means "to enlarge or make bigger in perspective." When we magnify a small object, we change our perception of it. We cannot make God any bigger than He already is but you can magnify your perspective of Him. Magnify the Lord! Speak of His greatness, His power, His might. Talk about how big and powerful God is. "When you make God bigger, you make your trouble smaller." It's simple but true.

To strengthen himself in the Lord, David had to let go of all earthly trusts and rest completely in the strength and provision of His God, for it is not by might nor by power but my Spirit says the Lord. Zec 4:6 God permits the hard times so that we might cast ourselves wholly on Himself and to walk by His Word. As for God, his way is perfect; the word of the LORD is flawless. He is a shield for all who take refuge in him. Psalm 18:30

We live in times where every day the news gets worse, a little more ominous, a little darker but no matter how dark and hopeless this world becomes and how deep our personal challenges are, God's people are to strengthen [encourage] themselves in the Lord and rest on His great and precious promises. Maranatha


I fellowshipped at the Mennonite Church this morning.  Always a time of heavenly singing and uplifting and encouraging Bible teaching.  They are having their annual conference next month.  Below is the program.  Maybe I'll see you there :) 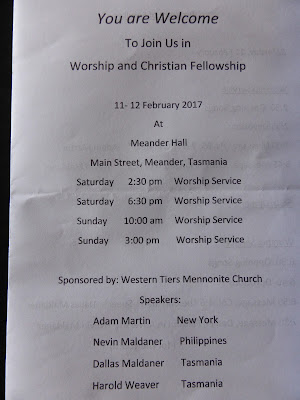 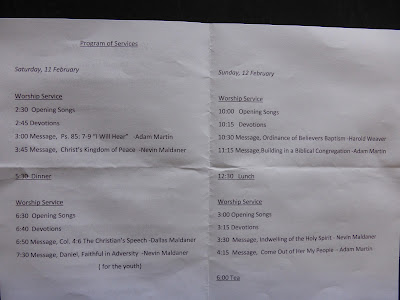 click on the photo to bring it up larger
Very hot and windy here today.  I am holed up inside with the aircon on.
I hope you are enjoying your day!
xx