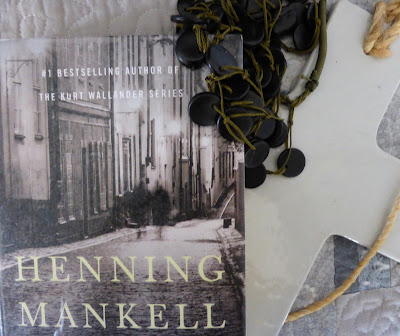 From The Shadow Girls by Henning Mankell:

“I don’t know what made me survive when the boat was smashed against the rocks and desperate people down in the hold were clawing and tearing their way out. But I know that the bridge that we thought we all saw as we stood on the beach in the northernmost part of Africa, that continent we were fleeing and already mourning, that bridge will one day be built. It will be built, if only because the mountains of corpses pressed together on the bottom of the ocean will one day rise above the sea like a new country and a bridge of skulls and bones will form the bridge that no one, no guards, dogs, drunk sailors, or smugglers will be able to topple. Only then will this cruel insanity come to a stop, these anxious flocks of people who are driven on in desperation only to end up living their lives in the underworld, becoming the cavemen of modern times.

I survived, I was not consumed by the sea and the betrayal, cowardice and greed. I met a man who held a palm frond in his hand and said that there were people in this land who wanted to hear my story and who would let me stay. But I have never met these people. I have given everyone my smile but what do I get in return? I thought he would be here to greet me, but no one greeted me. And perhaps I will be obliterated. But I think I am stronger than the grey light that wants to render me invisible. I continue to exist even though I am not allowed to exist, I am seen although I live in the shadow world.”
(the words of Tea-Bag, one of the ‘shadow girls’)

Henning Mankell never disappoints. This time he brings to us the plight of the refugee/illegal immigrant. Whether it is one of his crime series or a stand alone book, there is always that undercurrent of social conscience. I don’t know what it is about the way he writes that draws me to his books. Perhaps it is that he says enough to set the scene/facts/scenario, but doesn’t interpret. He leaves that for the reader, encourages us to think, imagine, explore, and perhaps, rather than just reading and forgetting, to go on and make a difference, even in the smallest way. And this book was written in 2001, but still the injustices continue.

I urge you to read this book...and remember…