But what does it all mean? Many great philosophical minds have tried to pare down their theorems to find the fundamental truths.
Often when we think about philosophy, we think about big ideas, complicated theories and untameable beards. While browsing the 900 pages of Immanuel Kant’s Critique of Pure Reason, who hasn’t thought they could do with, well, less? Less of it for a start—and perhaps less of philosophy generally. Yet since the classical times, philosophy has been fundamentally concerned with getting at the essential truths to the messy questions of life, the universe and basically everything. For all the long words and big books, thinkers have simply been trying to help us to live better lives.

Turning first to the Ancient Greeks, we come across Socrates, the father of the quizzical Socratic method of inquiry and star of Bill and Ted’s Excellent Adventure. This great Athenian proposed giving up material goods, arguing that we can only be truly happy by freeing ourselves from hankering after wealth and status. Anyone who was “not contented with what they had would not be contented with what they would like to have,” he reasoned.

Epicurus—another Greek philosopher—held that pleasure was the highest good. He promoted a doctrine called Hedonism that many still associate with the earthly excesses that Socrates frowned on. Dictionaries commonly define an Epicurean as “a devotee of sensuous and luxurious living.” But thrill-seeking visitors to Epicurus’s school just outside of Athens were shocked to find a man who drank only water, dined ascetically on vegetables and regarded “a pot of cheese” as a feast.

For Epicurus, pleasure was living well. And to live well, one had to be healthy and free from hunger and pain. Since indulging one’s appetite to excess could lead to sickness, emotional distress and reduce the overall quality of life, he believed it should be avoided. He therefore suggested that a plain but nourishing meal of nuts and berries could offer more intrinsic pleasure than a lavish banquet. To his mind, what constituted “abundance” was “not what we have but what we enjoy.” Like Socrates, he argued that for anyone who thought that “enough” was too little, then nothing would ever be quite enough. Epicurus’s ideas were embraced by the so-called Stoics, who counselled frugal, reclusive living and acceptance of suffering, and counted the Roman thinker Seneca as one of their leading lights, despite dining lavishly himself.

In the Middle Ages, William of Ockham, a Franciscan who had taken vows of poverty and chastity, became the next major apostle of philosophical simplicity. He urged thinkers not to “multiply entities beyond their necessity”—in other words, keep things simple, guys. When faced with two competing theories, he believed that the simpler one would usually prove best. This principle became known as Occam’s razor and remains an invaluable tool for eliminating metaphysical waste.

But Western philosophy’s most audacious attempt to strip things right back to basics perhaps comes from René Descartes, who decided to “demolish everything completely and start again from the foundations” while holed up in a Bavarian farmhouse in the bitter winter of 1619. By questioning all of his beliefs about the world, he concluded that the only thing he could not doubt was that he was thinking. From this, he derived his famous maxim, “I think, therefore I am.”

Naturally, philosophers have been arguing about this ever since. But then again, as Confucius once observed, “Life is really simple, but we insist on making it complicated.”

And the simple beauty... 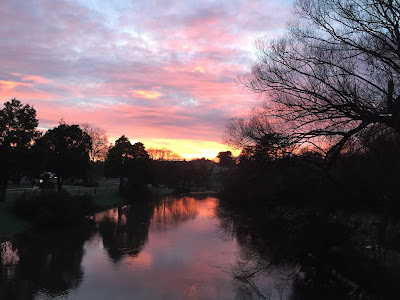 of an early morning sunrise by the river